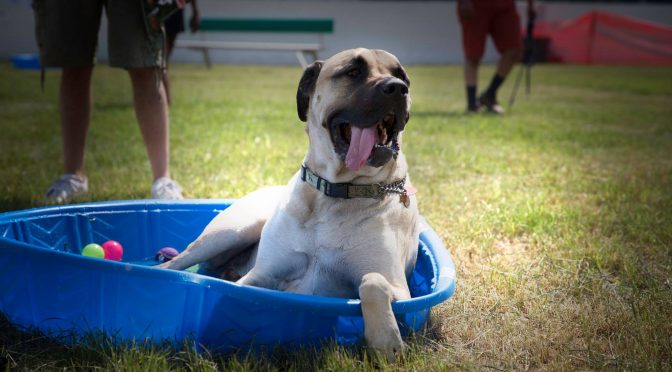 July heralds the return of Muttstock, and the annual dog festival promises to be a highlight of your dog’s summer, with food, activities, vendors, and live music.

Anjie Robinson, founder and president, said,“It’s like there’s a million dogs. You can’t go wrong with that. It will be a super fun time.”

Muttstock’s success has grown over the four years since its inception. Muttstock began as a festival run by Eastwood Community League, but became a separate entity by recently gaining non-profit status in Alberta. With a board of directors and a fundraising focus, the festival has grown quickly.

“There is increased attendance over previous years, and we have gone from 40 vendors in the past to 63 in 2018. We have also added a wellness component. Come to Muttstock and you will learn a whole lot.”

As a non-profit organization, Muttstock organizers focus on raising money for the animal rescues that form the entity’s committee. Robinson said, “My favourite thing, honestly, is being able to give money back to the rescues.”

Thirteen animal-related organizations are represented on the Muttstock committee and six more non-committee agencies are associated with the festival.

Robinson is excited about expanding Muttstock’s wellness component. New this year is Puppy Yoga. Aspiring yogis of all ages and abilities are invited attend a practitioner-led yoga session in a room with licking, playing, and cavorting puppies. This event is held in Eastwood Hall and promises to be full of love and tomfoolery.

Although Muttstock organizers require dogs to be on leash in the main festival areas, an off-leash area is located in the outdoor rink. Dogs can cool off in the wading pools provided, or run free as they make new dog and human friends. Drinking water and bags for cleanup will be available.

Of course, a key Muttstock draw is its live music. This year, The Denim Daddies, Lara, Stiletto, The Confusionaires, and Sweet Vintage Rides are performing. Robinson said the bands are beginning to form their own Muttstock culture of co-operation and celebration in support of the festival’s goals.

Muttstock organizers look forward to welcoming dogs and their families. Robinson is confident that this will be “a fun, affordable event, definitely for the dogs.”

Tekla Luchenski
Tekla enjoys renovating her 1953 bungalow in Parkdale, with attention to period style, including pink bathrooms. Trained as a cultural anthropologist, she is excited to contribute to The Rat Creek Press as a passionate observer of lifestyle and community expression.