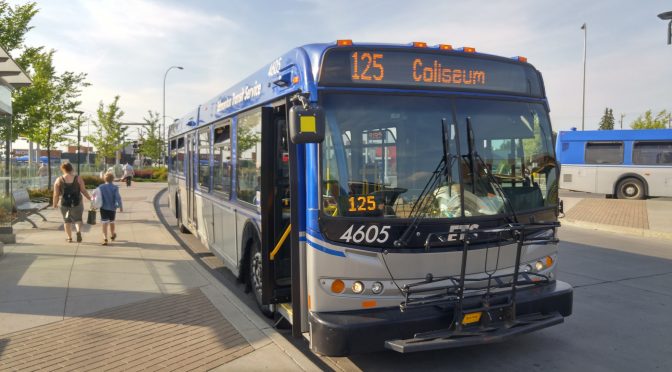 Funded by the City of Edmonton and the Government of Alberta, the Ride Transit program is a 16-month pilot project that allows eligible Edmontonians to purchase youth and adult monthly transit passes for only $35, a reduction from regular rates of $73 for youth and $94.25 for adults.

Eligible applicants must meet or be below a certain household income threshold, which includes the number of residents living in the applicant’s home.

Recipients of Assured Income for the Severely Handicapped (AISH), a service that provides health and financial benefits to eligible Albertans with a disability, also qualify for these subsidized passes.

AISH recipients used to get passes for the same price under a separate program. But Famida Martin, ETS fare policy and revenue manager, said the pilot expands the original program to include some family members of AISH recipients as well.

“Now dependents of AISH family members will be eligible for the [subsidized] transit pass, whereas previously they weren’t,” Martin explained. “So that’s a huge win under this pilot.”

Canadian National Institute for the Blind (CNIB) cardholders, and post-secondary students who receive a Universal Transit Pass (U-Pass) through participating institutions, are ineligible since they qualify for comparable programs.

To take part in the pilot, participants follow the application process for the city’s Leisure Access Program (LAP), an initiative that grants free and discounted admission to city recreation facilities.

As of July, the city automatically enrols new LAP members in the Ride Transit program. LAP members accepted before July can participate in the pilot by submitting an online enrolment confirmation form via edmonton.ca/ridetransit.

Once approved, participants can use either their LAP membership or photo ID to purchase their subsidized transit pass each month at one of several participating recreation centres and libraries located throughout the city.

Passes offered under the pilot are virtually indistinguishable from full-priced youth and adult passes—the only difference is the fine print on the back. Unlike the latter, subsidized passes are non-transferable, assigned to participating members, and specify the program’s eligibility requirements.

The city estimates that 40,000 Edmontonians will be eligible for the Ride Transit program.

As of mid-August, Martin estimates that 7,000-8,000 people have applied for the pilot. The city expects to enrol thousands more by the end of summer since most people wait until the end of the month before buying next month’s pass.

There are currently no plans to cap the number of available passes.

“[We] will not stop individuals who are eligible. If they are eligible, we will ensure that they will have access for the period of time they have been approved,” Martin added. “At the end of the day, I think everybody would like to see the advancement of this project into a permanent state.”

Visit Edmonton.ca/ridetransit for more information, including a full list of locations to buy passes and the income threshold.

Featured Image: An ETS bus parked at the Kingsway Transit Centre waits for passengers to board before departing.| Hamdi Issawi

Hamdi Issawi
Hamdi is a journalism student at MacEwan University. He cut his teeth as a contributor on Terra Informa, an award-winning, environmental news magazine. He has also written for The Gateway Online and The Griff. Find Hamdi on Twitter @hamdiissawi.