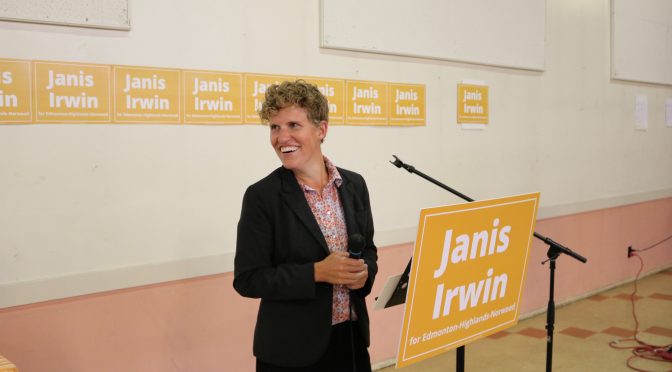 On the evening of Aug. 1 at Bellevue Community Hall, Parkdale resident Janis Irwin announced to a crowd of 200 that she will be running for the NDP nomination in the riding of Edmonton-Highlands-Norwood for the 2019 provincial election.

Irwin cited the legacy of NDP MLAs in the riding, including Ray Martin, Pam Barrett, and most recently, Brian Mason, whose political career of nearly 30 years is particularly inspiring to her.

“He’s been an incredible MLA,” Irwin said. “We’ve had a strong history of NDP support in our neighbourhoods. These individuals have left really big shoes to fill, but I think we can do it.”

With a background in education as a teacher, as a vice principal, and with the province, Irwin is especially motivated by issues of education and child poverty in the constituency.

“We have some of the highest rates of child poverty in our backyard, and we can do better.”

Irwin cited the NDP’s introduction of $25 a day childcare as an example of something that has benefited our area.

“Childcare is such a crucial support for a lot of folks here in our neighbourhood.”

In her work with the province, Irwin has been responsible for overseeing the recent curriculum development project. She stressed the importance of the project, pointing out that some of the documents are over three decades old. She said she feels the new development is timely, in order to incorporate topics like Indigenous perspectives, consent, and diversity. She explained it’s important that work continue.

Another area of interest to Irwin is health-care matters, especially in view of the cuts proposed by the current Opposition party. Despite an inherited economic downturn, she said she feels the current government has continued to make important investments, and it would be unfortunate to see that work stopped or reversed.

“I worry about what a billion dollars in health-care cuts would look like.”

Irwin’s experience also includes a number of community volunteer and advocacy roles. She is, for example, currently on the boards of Arts on the Ave and the Somali Canadian Women and Children Association.

Although she grew up in Barrhead, she has lived in Edmonton-Highlands-Norwood for eight years. She previously ran in the federal election for the Edmonton-Griesbach riding, gaining 34 per cent of the vote but ultimately coming in second to Kerry Diotte.

Another motivation for Irwin to run is her belief that all people should be represented in government.

“Growing up, I didn’t see a lot of people who looked like me in office, so it’s exciting that we have an opportunity to elect someone of my generation, who’s a woman and a member of the LGBTQ community…I want to be chosen to be a part of Rachel Notley’s team of candidates so that I can work to ensure that we can continue making investments in our communities, in our health-care system, in our education system, in childcare, and in the everyday services that reduce inequality and matter to all of us living here in Edmonton-Highlands-Norwood.”

The nomination meeting for the riding is scheduled for the evening of Oct. 23.

Featured Image: Janis Irwin makes the announcement that she will be seeking the NDP nomination for Edmonton-Highlands-Norwood at Bellevue Community Hall on Aug. 1. | Dave Cournoyer

Nadine is a professional facilitator and connector. She is also an enthusiastic member of the Spruce Avenue community, where she lives with her husband and young son.