The ARP complements work done on 2008’s Stadium Station Transit Oriented Development (TOD) plan. In 2013, after a developer expressed interest in the Muttart site located just south of the LRT station, council asked city administration to reassess the TOD plan and identify options for mixed-use development on that site and on the city-owned park-and-ride lot. In December 2014, council allocated over $14 million for TOD-supportive infrastructure at Stadium station and, the following month, Brookfield Residential purchased the Muttart site. 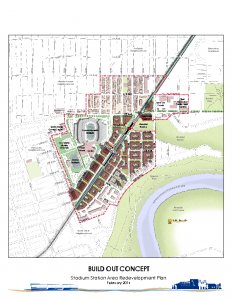 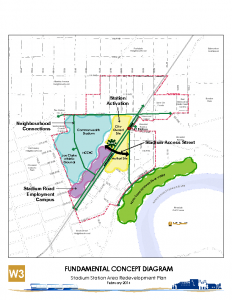 “It is important for people to understand that what is set out in the proposal is not going to happen over night and some of them may never happen,” said Erik Backstrom, senior planner with the city. He said relocating the LRT station is one of the things unlikely to occur for a long time, if at all.

To folks concerned about increased density harming neighbourhood character, Backstrom noted while the plan calls for 1,600 new residential units over time, that is unlikely to happen.

“Rarely, if ever, is the maximum potential for these developments reached,” he said and pointed out the plan calls for single-family dwelling areas of Parkdale, for example, remaining unchanged.

But creating a level entrance to the LRT station will likely happen during the first phase. Currently, transit riders go below grade to enter the station and then ascend to reach the platform. When the station was built in 1978, the city designed it to accommodate the freight rail track beside it. Those tracks have since been removed.

“I’d really like to see more of an effort made to create housing for families,” White said. “We need housing for a diverse range of people: seniors, the disabled, and families need homes just as much as single people do. We need more of a balance, not just in Boyle Street but in any community.”

White hopes the plan (which impacts the city’s Mature Neighbourhood Overlay and previous plans adopted for Boyle-McCauley, Virginia Park, Parkdale, and Cromdale) takes the need for diverse housing options contained in those plans into consideration.

One woman present asked Backstrom if the city intends to remove the parking lot serving as a park-and-ride. Backstrom said the plan is to consider developing it during the project’s second phase and would involve eliminating surface parking and turning the property into a retail/commercial area. The third phase would see building a public plaza and possibly a promenade facing 112 Avenue.

The plan now goes back to city council for approval. Following necessary rezoning and engineering, construction is expected in begin in 2018.

Digging at the roots of a thousand faces