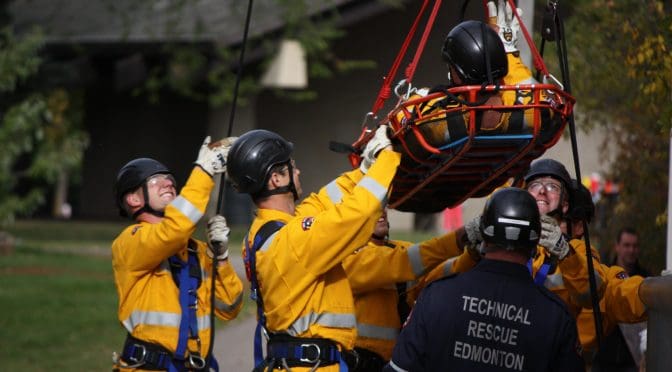 “In a major emergency, people assume that fire, police, and ambulance responders will show up and take care of things. They will come as soon as they can, but that might not be right away. So people need to be prepared to fend for themselves for a while.”

So said Paul Riopel, founder of Emergency Response Management Consulting and a 30-year veteran of the emergency preparedness field.

In emergencies, the most accurate and current information is available from radio stations or the Alberta Emergency Alert system, accessible as a downloadable mobile app and online.

Following official instructions is one of the best things to do in a disaster situation. Beyond that, everyone should make it a priority to protect their own safety.

“Stay away from downed power lines, use your common sense,” said Riopel.

Every household should assemble an emergency kit containing enough non-perishable food and water to last for up to three days, a basic first aid kit, and either crank-operated flashlights and a radio, or battery-operated ones and extra batteries. The Alberta Emergency Management Agency (AEMA) offers detailed instructions on creating a kit on their website.

In the Rat Creek area, we face the possibility of manmade and natural disasters.

The proximity of the Yellowhead highway and CN’s Walker rail yards to the north represent one type of risk: “Dangerous goods are transported along those routes on a regular basis,” Riopel said.

We are also at risk for tornadoes, damaging winds, overland flooding, and ice storms, among other hazards.

“The chances of a tornado in Alberta is very high—we get tornadoes every year. However, the chances of one hitting any particular spot in Alberta are very, very low,” said Riopel.

If a tornado does hit, Environment Canada recommends people “go indoors to a room on the lowest floor, away from outside walls and windows, such as a basement, bathroom, stairwell, or interior closet. Leave mobile homes, vehicles, tents, trailers and other temporary or free-standing shelters, and move to a strong building if you can. As a last resort, lie in a low spot and protect your head from flying debris.”

Damaging winds are of concern because we have many mature trees and overhead powerlines. Our area is most prone to overland flooding resulting from drainage systems being overwhelmed by rainfall and backing up.

In winter, ice storms could cause our area to lose power.

Riopel explained most gas furnaces need electricity for the blower motors to function, so they won’t work in a power outage. In addition to storing extra blankets and warm clothes in your emergency kit, Public Safety Canada said, “Install a non-electric standby stove or heater. Choose heating units that are not dependent on an electric motor, electric fan, or some other electric device to function. Adequately vent the stove or heater with the type of chimney flue specified for it. Never connect two heating units to the same chimney flue at the same time.”

Surprisingly, people are asked not to call 911 during a major emergency. Riopel said in most major emergency situations, so many people call in that it crashes the phone system. It’s important that the lines remain open for exceptional individual emergency calls, such as if someone had a heart attack during an ice storm.

The City of Edmonton provides a wealth of practical information on emergency preparedness on their website.

Riopel, when asked what he feels people don’t know about emergency preparedness, said:

“There’s a philosophy of personal preparedness, in addition to the practical steps. People need to be ready to fend for themselves to at least some degree in a major emergency.”

Featured Image: In a major emergency, responders have a long list of priorities. It can take three days for them to get to an individual home. | City of Edmonton

Latest posts by Editor (see all)