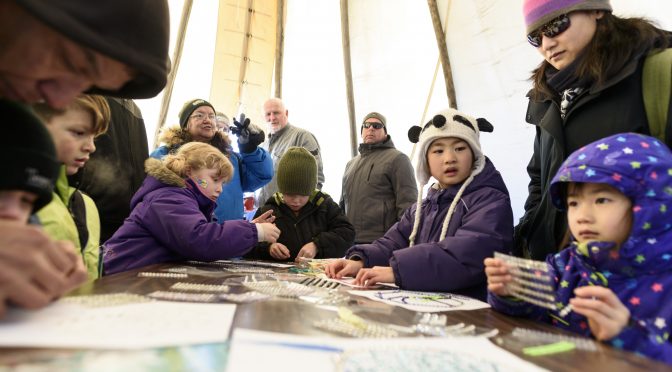 Close the door behind you and step into a world of ice and snow art, costumes and street hockey. That’s the promise and follow through of Deep Freeze: A Byzantine Winter Festival.

“We go to Deep Freeze every year. It’s been a family event,” said Maggie Glasgow, a resident of Alberta Avenue with her husband and young family since 2007.

She recalled how, in one of its early years, they tasted Quebec-style “tire sur la neige:” maple syrup boiled down and rolled in snow. It’s become a favourite.

Deep Freeze turns 10 this year, and its creators will be taking a village and turning it upside down.

“We were looking at an image of a house built upside down and thought, why not incorporate it as a theme?” said Christy Morin, artistic director.

Ten years ago, a group of local artists founded the festival (with Arts on the Ave presenting it) to brighten the doldrums of the Edmonton winter. They combined traditional and not so traditional, activities, art, and a dab of magic and whimsy. The byzantine in the name refers to the founders’ idea of aligning the festival’s timing with the Orthodox New Year on Jan. 14.

Organizers also saw Deep Freeze as a way to showcase artists who live on the Avenue, said Rebecca Pickard, who’s been volunteering along with her husband from its beginnings.

“To make the city see it as an arts district. Now artists submit pieces from all over.”

Shelaine Sparrow has lived in the community for 17 years and volunteers for the festival when she can, but is definitely motivated as a participant.

“I’m an enthusiast,” said Sparrow. “I’m rooted in the spirit of the events, the sharing with community members in such an authentic way. It’s become a genuine part of the Avenue.”

The festival’s endurance is in part thanks to continuity balanced with flexibility. There’s a different theme every year. But what’s always present is the celebration of cultures. Pickard said she is especially taken with the French and Métis elements, being a Métis woman herself.

“I remember the first years, with the Ukrainian and French elements. But the last couple of years there’s more of a presence of Aboriginal culture, with the elders, the smudging, and drumming.”

There’s also the street-level connections—neighbours bonding with neighbours, breaking the isolation that decreasing daylight hours can bring. Carissa Halton, her husband, and their young family have lived in the area for about 13 years.

“My kids have grown up going to Deep Freeze, thinking it’s normal for the street to shut down after Christmas for Arts on the Ave,” said Halton, noting how her oldest son takes advantage of the activities. “He loves the street hockey, knocking the puck back and forth, just having that freedom to go out on the street he knows so well.”

Everyone needs social interaction, said Sparrow, who takes her daughter to Deep Freeze for the fun and the communal aspect.

“Being in the deep dark pockets of winter can be isolating. I love seeing my neighbours, seeing the kids. I don’t see them all year and then I see them at Deep Freeze, how they’ve grown.”

Festivals like Deep Freeze have raised the profile of 118 Avenue with the rest of the city. Edmontonians are finding out what neighbourhood children have known now for 10 years.

“I like the slide, because it’s fast. And the ring toss,” said 7-year-old Lily Halton. “Last year, I got to sit on the big throne. We always warm up in the big tent.”

And local festival-goers can skip the car ride.

“How could I not go? The live music, the arts and culture, and so close to home,” said Sparrow. “It’s a gift.”

Admission: free or donate what you can.

Go to deepfreezefest.ca for events and times.