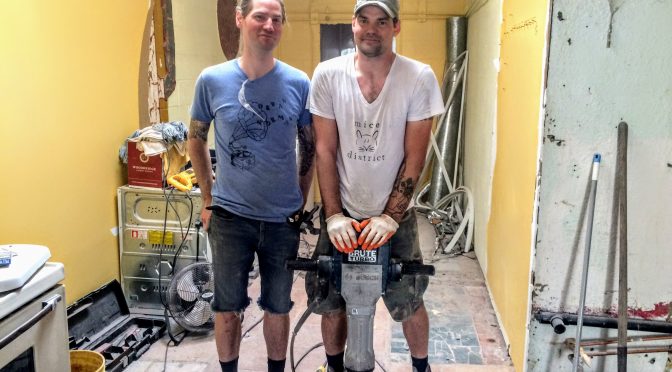 A year ago, I interviewed Philip Muz about The Aviary. We talked building permits and funding needs; revised plans and hopes deferred.

Today this community arts hub remains unopened, but that is about to change. City permits have been issued and renovations are in full swing.

According to Muz, the reasons behind the delay are complicated.

“Before we bought the building, we asked all the right questions,” said Muz. While he and his brother Mark have past experience with permits, an old building brings surprises. The city’s requirements were over and above what the brothers expected. “Bringing that old building up to 2017 code, that was the tricky part,” said Muz.

The Aviary will be licensed as a restaurant so that events can be all-ages. As a musician whose kids can’t attend many of my shows, I welcome this. A restaurant designation brings major costs and delays though, such as a ventilation system with a lengthy approval process.

Every dollar Muz could find went into the down payment for the 111 Ave building, leaving a daunting $30,000 to renovate to code.

“This winter was dark,” Muz told me. “I was getting really negative.”

The Muz brothers have been building fences, decks, and picnic tables and applying elbow grease to earn the cash, but the process hasn’t been fast enough to stop their building permit from expiring and having to be re-filed.

Huge sacrifices are needed to bring a venue to life, but the Muz brothers are up to the challenge. He cracks a wide smile about using a jackhammer. “I’m really enjoying this whole renovation thing, and knowing that we’re starting to see the finish line, it’s given me this little boost of energy.”

The darkness cleared, he can now see an upside to waiting. “We’ve changed a whole bunch of things and that wouldn’t have happened if we’d have been approved right away. We would have gone with our original design, which is a terrible design,” Muz laughed. The revised design brings a lobby space, a huge art feature wall, as well as a reconfigured kitchen and stage layout.

Expect a rotating menu with a cast of guest chefs. I’m looking forward to Sunday brunch. Plenty of music will join other arts to fill the space. There will be great handicap accessibility, and The Aviary will be open as often as possible for events and rentals.

A major two-night fundraiser is coming up at The Mercury Room from June 17-18 to push past the finish line. Expect a silent auction, live music, and sweet surprises.

With our help, the Muz brothers will put down their jackhammers and open The Aviary later this summer.

Dave Von Bieker
Dave Von Bieker writes essays, poems and songs that hold a magnifying glass to the Sacred small. He looks for beauty everywhere and is awestruck at how often he finds it. His reflections on art, faith, and technology ask questions about what it means to be a slow, attentive human in a world of fast, distracting machines.

He holds a Bachelor of Theology Degree and is Artistic Director of the Bleeding Heart Art Space. He lives in inner city Edmonton with his wife, two children and a small dog who is most certainly not a cat.
Latest posts by Dave Von Bieker (see all)