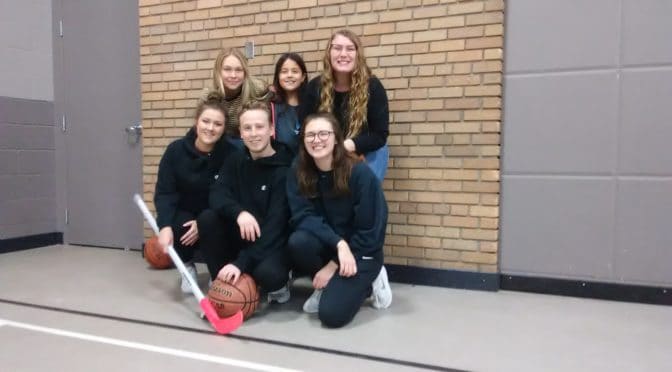 Another Friday evening of sports and camaraderie with the City Youth Group has begun.

“It’s fun. You get to know different people and it’s good to just get out of the house,” says Dryden Ferchoff, one of the regular participants. “There’s enough structure to have a set day and time, but also lots of different activities.”

A partnership of City Centre Church and Vanguard College, the weekly youth program has been growing ever since it was started by Kurtis Fricker, who started studying at Vanguard in late 2018. Fricker, who is enrolled in the pastoral major, said he wanted to give his two younger brothers some engaging activity. Their church didn’t have any programs and his brothers weren’t part of a youth group, so he decided to change that.

“They had nothing to do Friday nights, so my thought was, let’s go play some hockey or basketball at the gym. Let’s find a safe place to hang out.”

As more teens started showing up, the activity level expanded. It has now become a regularly scheduled youth program for Grades 7 through 12. A typical evening draws between 12 and 20 eager attendees.

The intent was always to create a safe space for youth to have fun, to build community, and to forge lasting relationships, explained Chloe Lemieux, one of the youth group leaders.

“Our hope is that the time we have together can be used to build healthy relationships with them,” she said, noting that early meet-ups were pretty simple, focusing on basketball or hockey.

Since then, programming has expanded to include not only sports and games, but also outings and life sharing.

“We now have themes like dodgeball night, and in good weather we play capture the flag outside,” said Fricker. “We’ve been to the corn maze, we have a swim night.”

The leaders, all students at Vanguard, started adding more devotional aspects as the interest grew.

“We started sharing stories about our experiences, teaching them about the Bible, anything they want to know about,” explained Lemieux. “As leaders, we want to share some Christian values. But we never want to force it on them, just share what it teaches us.”

The supportive and encouraging atmosphere is showing results. Fricker says he sees how many of the youth are learning how to behave and treat others with respect.

“A big change I see is the relationships happening between the kids and with our leaders,” he said. “We want to create a space where they can feel safe, where they know someone cares about them.”

The City Youth program welcomes any youth who would like to attend. The hope is that more will participate from neighbouring communities such as Westwood, Spruce Avenue, and Alberta Avenue.

That shouldn’t be a big challenge, feels Kyle Fricker, who has been attending from the start.

“The leaders, they make us feel welcome,” he says. “You meet new people, make new friends.”The City Youth Group meets at 7 pm every Friday at the Vanguard College gym, located at 12140 103 St. No registration is required; just drop in. Find out more on Instagram @youthcitycentre, on Facebook @city youth, or by emailing youth@citycentrechurch.com.