Spruce Avenue is growing a space for food and connection

This year, Spruce Avenue Community League will celebrate spring with the unveiling of their new community garden.

The garden, which has been in the works for two years, is located on the northwest corner of 115 Avenue and 103 Street, across from the league hall. It will be housed in a lot that was previously used as a construction site for neighbourhood renewal projects.

“I really love urban agriculture, and I think gardening is a great way to bring different generations of people together,” says Ashley Ayume, the garden chair.

Ayume notes that limited yard space in the community was a driving factor behind the community garden. “We’re getting more densification,” says Ayume, “so lots of fourplexes are getting built in our neighbourhood, and we have a strip along 97 Street [that] has lots of apartment buildings. So, new residents [don’t have access to] yard space.”

“And also beyond that, we just wanted a space for our community to come together,” continues Ayume. “Most of our gathering spaces right now are around the playground… but I also know that people that don’t have little kids want space, too.”

Ayume adds, “Digging in the earth and growing food, it’s just a very… almost primal way of bringing people together that seems to draw [in] different generations [and] different lifestyle types. Everybody can collectively come together with that.”

While the garden is primarily for residents of the Spruce Avenue community, Ayume says that anyone from neighbouring communities is welcome to apply for a spot. Spruce Avenue is currently taking open applications.

The garden will feature 32 in-ground beds, five raised beds, and a trug, which is a V-shaped garden bed accessible to wheelchairs. They will all be available for rent.

Currently, it costs $30 to rent a garden plot, which includes water and soil amendment costs, but Spruce Avenue is still in the process of fundraising in hopes that they can subsidize the cost of the garden beds to be $15 a spot. There will also be several free garden plots available for those who don’t have the financial means to rent a spot.

Additionally, the garden will feature a food forest, where fruit trees, shrubs, and smaller plants like strawberries will be grown. This area will be open to anyone interested in harvesting and eating the food.

The Spruce Avenue community garden is also partnering with neighbourhood schools so they have space in the garden to grow veggies and fruits to fit with their curriculum. Ayume notes that the schools could grow a themed garden every year, such as a pizza garden with basil, tomatoes, and peppers.

While there are no explicit guidelines about what can and cannot be grown (although noxious weeds are not allowed) there are still a few guidelines about the growing process. The community garden allows only organic fertilizers, with no herbicides or pesticides; water conservation is encouraged.

The garden has yet to be built due to the lingering snow, but the plan is to have the garden up and running by the May long weekend.

If you’re interested in renting a spot or getting more information about the garden, contact Ashley Ayume at [email protected] 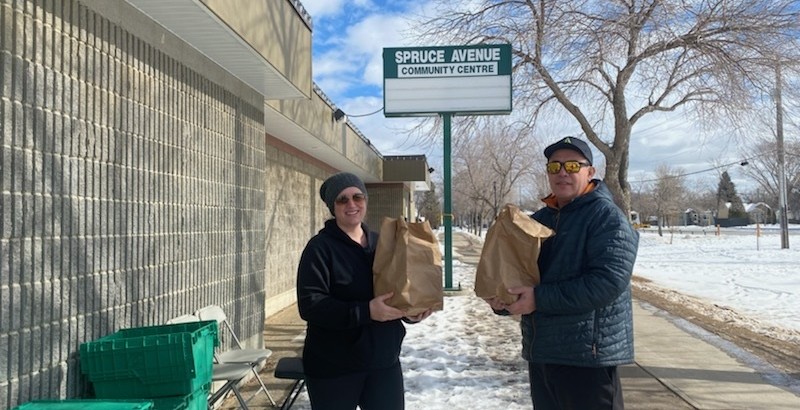