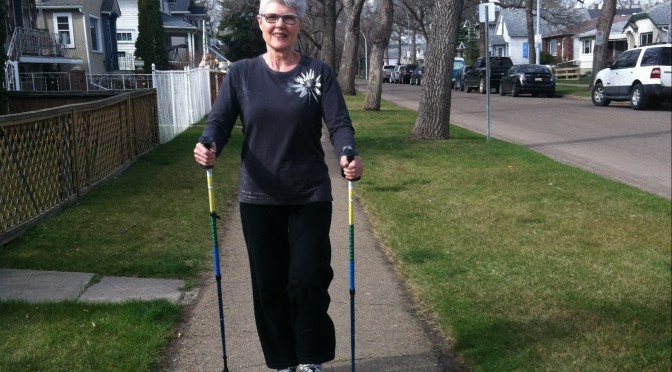 Community residents have the opportunity to try out urban poling this summer and fall.

“I’ve done a few sessions now,” said Parr, adding that she gets an excellent workout. “You have to keep the proper technique in mind.”

Parr responded to a call out from the Edmonton Federation of Community Leagues (EFCL), which invested in sets of the Nordic walking poles. Alberta Avenue Community League was one of the six community leagues that were interested.

She received training and is offering four four-week sessions from May until October. Eight spots are available for each group, which will meet two times a week (Monday and Wednesday or Tuesday and Thursday) for one hour. The sessions are available on a first-come, first-serve basis.

People participating will first need to complete a health self-assessment.

“You may need to get a doctor’s permission or clearance,” said Parr. She added that the first day of each session involves watching a tutorial video and practicing.

Parr explained that pole walking is a chance for people to meet neighbours and explore the community.

“We’ll take neighbourhood routes,” she said, explaining that everyone will meet at Alberta Avenue Community Hall before each walk. “Hope to see you out walking, it’s worth it!”

Email Parr at vsuparr@gmail.com with the subject “Urban Poling” for information.

Talea Medynski
Talea is the Rat Creek Press editor. She loves sharing the stories of our diverse neighbourhoods.