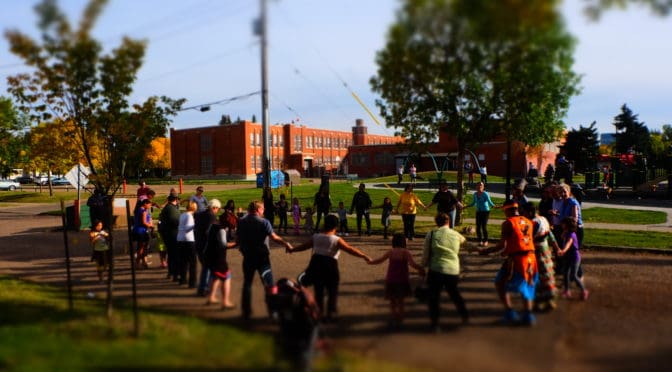 Heighten spirits this fall at your neighbourhood community league

This fall, local community leagues have something for everyone, from a petting zoo to tango lessons.

The 20 classes give participants more balance in posture and in their daily routine. The yoga class is a program requiring registration and payment to participate.

For balancing home and yard, Westwood’s big bin event is on Sept. 21. Community members can deliver their unwanted large items to the bin at the Westwood Community Hall parking lot.

Spruce Avenue Community League is continuing its family-oriented programming, with their annual Harvest Festival taking place Sept. 21 on Community League Day. A city-wide celebration of Edmonton’s 159 community leagues, this year’s theme is ‘Get to Know Your Neighbours’.

“We have a petting zoo booked for the Harvest Fest,” notes Ashley Ayume, Spruce Avenue’s programming director. “We’re also planning a community supper . . . with yard games in the afternoon and of course selling league memberships.”

At the Harvest Festival, the league will also be recognizing the Front Yards in Bloom chosen in Spruce Avenue.

Winter programming is in the works, including a hibernation celebration to include a horse-drawn sleigh ride and other family activities. The board is also hoping a parent can offer to host a parents and children meet-up one day a week to bring cheer to the colder days ahead.

Alberta Avenue will be bustling for all ages this fall, with plenty of new programming (see article on Virginia Potkins for more info), urban pole walking, and the continuing math tutoring drop-in sessions. The collective kitchen is starting up again as well.

“We put many of our games and icebreakers in the grassy fenced space out back, serve food and sign people up or renew their memberships,” says van Alstine.

Not to be put off by the shrinking daylight hours, the Parkdale-Cromdale Community League (PCCL) is resuming its popular weekend programming with the CreArt music program and tango lessons. Restorative yoga and meditation continues. New this fall is a Wednesday evening adult barre class and a Friday morning family yoga.

Beginner sewing and the collective kitchen resumes in late September, and details are in the works for a community mediation clinic, offering community members looking for dispute resolution some free time with a lawyer.

On Community League Day, the harvest dinner will offer members a free meal sourced from their community garden and donations from neighbourhood restaurants.

“It has always been our aim to serve the area in a way that joins people together and this dinner has been the largest event to do so in recent years,” says Kevin Wong, president.

Plans for a federal election forum are underway as well. Stay tuned to the PCCL website for more details.

“We’ll have details out in a few weeks in terms of dates and times, but typically this group will do a game, a craft, and have a snack each week.”

The league is also looking forward to their annual chili cook off and barbecue for Community League Day.

At Eastwood Community League, weekly drop-in meditation continues Mondays for any member wanting to deepen their practice or learn how to start.

Eastwood also has an open house planned for Oct. 5, giving members a chance to meet, enjoy produce from the community garden, and check out the recent hall renovations.

“The open house is for mingling and finding out about programs and opportunities we have going on in the neighbourhood,” explains Erin Campbell, communications director.

The open house will be followed by the AGM, all at Eastwood Community Hall.

Featured Image: Spruce Ave’s Harvest Festival has a variety of entertainment everyone can enjoy. | Supplied