Watching new skaters test their steadiness through sheer persistence is a cheery experience come winter as outdoor rinks become available in the neighbourhood.

“I like making ice for the kids. I get a laugh out of watching them learn how to skate and the smile on their faces,” said Henry Stainthorp, rink manager at Spruce Avenue Community League (SACL), while flooding the league’s rink in November.

He noted the new rinkside floodlights, required by the city. Thankfully there are grants for such things, but the seasonal and volunteer-based nature of rink operations comes with constraints. Combined with insurance and other costs, neighbourhood rinks face many challenges.

Skaters once prized Alberta Avenue’s rink. On avenuehistory.org, there was an excerpt from Through the Years – Alberta Avenue 1995 in which resident Alex Mair described how the rink came alive on weekends.

“Saturday and Sunday evenings, the skaters would whirl around the ice to the sound of a live band … They had live music down at Central Rink, yes, but they didn’t have the live music that filled those winter nights at the Alberta Avenue Skating Park,” Mair recalled.

“Usage isn’t as positive as it used to be, like back in the day, with families deciding to go out for a skate on a sunny winter day,” said Lyall Pedersen, rink manager. “And it’s not always open, due to the weather.”

Edmonton has an estimated 130 outdoor rinks. Some struggle, while others do well.

The Newton Community League replaced its old rink in 2013 thanks to some innovative funding arrangements and lots of volunteers. Our neighbourhood outdoor rinks include Eastwood, Parkdale-Cromdale, Delton, Alberta Avenue, and Spruce Avenue. Westwood once managed its rink, but the city now runs it.

The origins of the modern, indoor rink can be traced to Montreal, where the first organized indoor game was held in 1875. Nineteen years later, the Thistles hockey team played Edmonton’s first ever recorded game. Then there was Edmonton’s Thistle Rink (built in 1902 and burned down in 1913), Edmonton Gardens, and Jasper Avenue’s Central Skating Rink (opened in 1922).

In Edmonton’s neighbourhoods, the 1950s saw rink development reach a high point. When SACL got going in 1951, the first thing on their list was a rink, along with a bowling green and baseball diamonds. By 1964, the 125 community-operated rinks had over one million visits.

Not all was upbeat. Ritchie Community League had trouble financing its rink as early as 1946, and so did Jasper Place, Oliver and Riverdale. Despite the fact that Elmwood Park’s first priority was a rink in 1948, it no longer has one.

“It was removed many years ago, the prime reasons being there was a lack of interest from volunteers to run it and a lack of funds to pay someone to maintain it,” said Gillian Daley-deGroot, Elmwood Park Community League president.

According to Edmonton Federation of Community Leagues (EFCL), while most community rinks rely on volunteers, many community leagues now hire help. It hasn’t held them back.

“In the last 20 years, there’s definitely an increase in the number of rinks,” said Joanne Booth, EFCL assistant director. “After building a playground, a rink is usually the next facility to get built.”

Weather is another challenge. According to a study conducted by Nikolay N Damyanov, H Damon Matthews, and Lawrence A Mysak, Canada’s outdoor skating season has shortened, particularly in Southwest and Central Canada. Wilfrid Laurier University reports some cities could see up to a third of the outdoor skating season disappear over the next century. Calgary could see a 19 per cent drop.

Leagues are doing what they can. Just this past December, AACL organized a New Year’s skating party—the first in recent memory.

“We’re trying to put in some positive effort,” said Pedersen. “We want to get people using the rink.”

It’s also up to community members to use them. The Eastwood rink sees a variety of users from the neighbourhood.

“We’re expecting more, as we have done some upgrades to the sports facility to ensure it’s more efficient and secure,” said Tish Prouse, past president of Eastwood Community League.

In Delton, the hour or two of public skating shifts to shinny hockey.

“Shinny is so popular—the public skate, they hardly get a chance,” said Walter Gurba, Delton Community League’s rink manager. He divides the rink in half if a mom with a toddler drops in.

“So the kids can skate,” Gurba said. “We have good ice, people know about it.”

Like Delton, Spruce Avenue has a Zamboni, making for a great ice surface. The Spruce Avenue rink is used by the two adjacent schools and by the city’s Learn to Skate program.

Meanwhile, EFCL held its second annual outdoor rink contest this winter, with community leagues across the city vying to take the trophy and bragging rights from defending champs Grandview Heights. 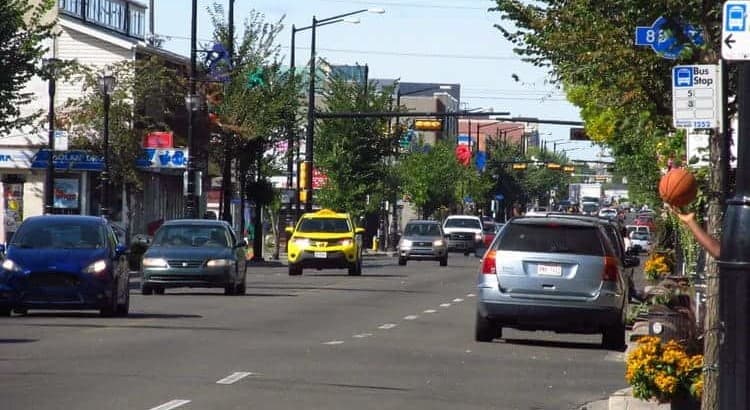 The transformation of Alberta Avenue