The walls of the neighbourhood just became more alive with art. From July 21-31, Alberta Avenue was graced with two more murals, part of Rust Magic 2017, a festival of mural creation. Edmonton’s Justin Moose and Jade Jordan and Victoria’s Relfy created the artwork.

Rust Magic is in its second year and hosted over 20 local, national, and international street artists in Edmonton. The festival started as a labour of love and community building for its organizers. This year, the festival was sponsored in part by Edmonton Arts Council.

Community organizations Arts on the Ave (AOTA) and Alberta Avenue Business Association, along with Capital City Clean Up, worked with festival organizers to get the two murals in the community. Christy Morin, executive director of AOTA, contacted festival organizers, applied for funding, and helped scout out walls for the murals. Judy Allan, the city’s Avenue Initiative Coordinator, was an enthusiastic cheerleader for the project.

Artists were given free reign when creating their murals.

Alberta Avenue residents Justin Moose and Jade Jordan designed and painted a mural on the east side of Optimum Auto Service to look like an old ghost sign. The wall started as a blank grey canvas and was painted to look like distressed brick with old advertising.

“People think we are uncovering an old sign,” said Jordan. “People would ask what kind of stripper we were using.” In order to paint the mural, they studied old ghost signs and emulated that style. The wall was rolled and then hand painted to make the brick look distressed.

This style is “a new passion” for the artists, said Moose. The distressed look is a departure from Moose’s previous public mural, Nothing Gold Can Stay, on Whyte Avenue’s Track and Trail building. The sign is meant to have a magical feel with the Wizard of Oz reference.

Relfy’s mural on 91 Street is a creation of multiple panels and styles. Relfy wanted to create a piece of art that would invite people to come closer and drift from panel to panel, as if they were portals to a different dimension. The styles include graphic illustrative elements, abstract impressionism, surrealism, and cartoon or comic styles.

As an artist-in-residence at one of Victoria’s inner city schools, Relfy said, “I like the possibility that I could inspire kids.” Relfy said in the week he was painting, “I got nothing but positive feedback.” He is happy he can “encourage and inspire youth.”

Given that the wall faces an open green space, Relfy thought about the art in the context of the four seasons. He stated, “I kept colours in mind when doing this piece. I wanted to create a feeling of warmth in the colder seasons.”

View Moose’s work at www.justinmoose.com and Jordan’s work on Twitter at @jadetez. Relfy’s work shows up on Google searches. He was also invited to paint at internationally renowned Meeting of Styles in Naples, Italy in September. Find more information about Rust Magic 2017 and locations of the murals at www.rustmagic.ca.

Featured Image: Relfy, an artist from Victoria, painted the building overlooking the green space on 118 Avenue and 91 Street. | Rebecca Lippiatt 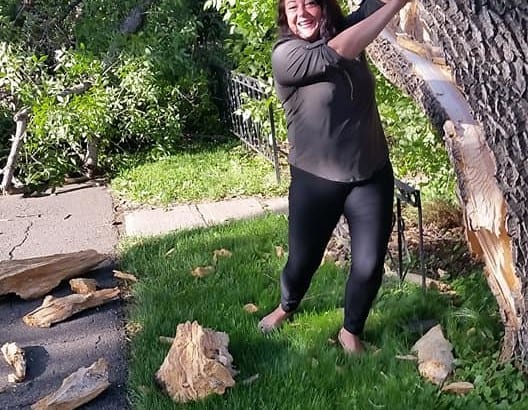 When a tree fell, everybody heard it